My friend Marlene, over at Country Girl on the Chesapeake Bay had a post about a "Giveaway Meme" that she was/is doing. I told her I'd like to do that, too... but I didn't know what a "Meme" was (still don't... but I'm going to look it up just as soon as I post this). I did look it up! It means to use something from somebody else's mind to spark the creative impulse in your own mind... so that's what I'm doing: using Marlene's idea and carrying it forward.


Anyway, the deal is that I'm going to give away seven "things" to the first seven readers who respond to my post (assuming I have seven readers)... one to each person, not seven to one person! And one for Marlene P. as well - so you don't have to be the first seven, M... that makes eight - but Marlene wasn't expecting that part.

All that YOU, fearless reader, have to do is comment on this post saying that you'd like to be on the receiving end of what I decide to make for you. Oh, yeah, and then respond off-blog (email, please) to me letting me know where to send your gift.
And another caveat: you have to pass on the goodness by posting that you'll give away seven things to seven people who read your blog... sometime within the coming year (by Dec. 31st of 2009).

What can these "things" be? Well, anything that I choose to make for you... it will be something you'll like, because I don't do shoddy work. And it won't be something I bought - because that isn't the point of a gift - it has to be from the heart... which is why I've got a year to figure out what to make for you - just for you.

But if it really isn't your style... it is OK to re-gift the gift - but you can't sell it! Ever. No matter how rich and famous I become (like that's going to happen!), and the $$$ you'd make from selling the gift could keep you in fine style at a Bermudan Resort for quilte a while, the "thing" I make for you must never be sold... it can only be passed along, OK? That last part is my caveat, not Marlene's. But I like it. This is in the spirit of giving and renewal. No selling.

OK, That's it, I think.
I'm going upstairs to finish the borders on my Bears quilt now.
Posted by Librarynan at 8:59 AM 3 comments: 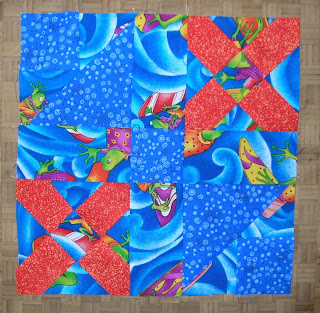 "Leap Frog" was the name of the block Donna picked for this week's Friday Block Party... and what could I do but look around for some froggie fabric! I thought I had another one, but this one worked just fine. Not my usual colors, or print! But I like the way the bubbles work with the waves, even though the colors are way too close to the same. The very bright orange "X" pulls the surfing frog print to the fore, I think. I didn't like the block at first, but it kind of grew on me. Now I think it is pretty cool. 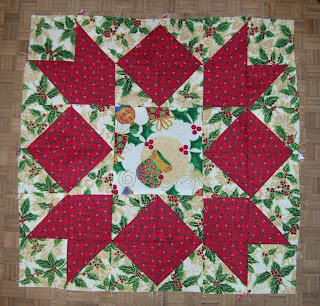 Must have been in a blue funk today; I thought our Block of the Month for March was too similar to the February block. Given that I'm doing a Christmas quilt and I don't have a LOT of Christmas fabric in my stash - yeah, I know hard to believe... but true! With six boxes of fabric, I actually have very little Christmas-y stuff. I didn't want to do two blocks that were very similar stars and had almost the same fabrics as well. Anyway, I was looking for a good block to use for Marjory's quilt and thought I'd try this one, "Love in a Mist" from Quilter's Cache to see if it was suitable instead of doing the actual March block. I may do the March Block anyway later... when the season rolls around and I can get some diferent Christmas fabrics. This block might work for Marjory's quilt, though... still not sure. I'll audition some more blocks before I decide. 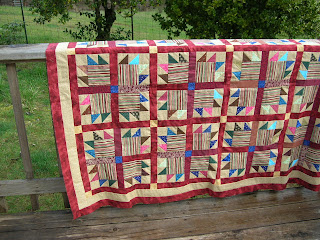 The Quilt Along "Bears in the Farmhouse" is looking much better, now that I've got more of the bright red in the sashing and borders. It was looking a bit dull before they went on. Now, two more borders and it will be finished. I've never made a quilt this fast before. Peer pressure (and knowing Judy is watching) is a wonderful thing.

The rain stopped long enough to take the top outside to snap this picture. I do love the rain! I guess that is one reason why I like Oregon so much... the trees. Without lots of rain we'd not have all the forests, and I'd not be happy without my trees. 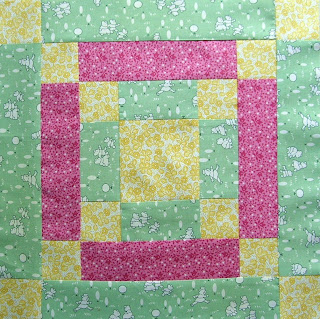 I forgot to show you what the Friday Block looked like from this week... week 11. It is called "Chimneys and Cornerstones", or something like that. I like the Aunt Grace Fabrics, even though the raspberry one looksmore intense on this page than in actuality. Guess I should mess with the color intensity and re-post it. Maybe... but I'm really lazy, so that probably won't happen.

Posted by Librarynan at 6:01 PM No comments: 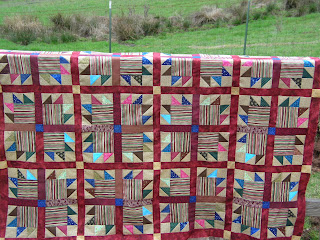 I got the sashing done on my "Quilt Along" Bears Quilt... now I just have to do the 2 inner borders, and post the photo to the Flickr Page, and I'll be good to go on the next step. I can do that!

I decided not to go to the fabric store, and used some red that was in my stash, and goldy cornerstones. I'm liking it better now... the all-one-fabric red sashing ties the patches together better than I had envisioned, even. I'm going to stick with the red (hope I have enough) for the next-to-inside border as well. I'll show you when I get the next two borders on. Then comes a row of HSTs (I think) and a row of stripes... I may have to bind with dark brown - depending on how much red I've got left! 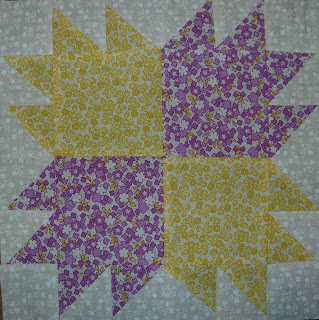 This week's Friday Block Party was a BearPaw variation called Bear Tracks, froom Quilter's Cache. I didn't like the way the Aunt Grace fabrics looked using that setting, so I put them together in the traditional setting... with only one block the nice secondary pattern wasn't evident.

I've been setting the Bears in the Farmhouse and have decided that complicated as I thought it was, Bearpaw is probably one of hte easiest blocks to do! I think John's Graduation quilt will be a BearPaw, but that's not for sure, yet.
Posted by Librarynan at 10:26 PM 1 comment: 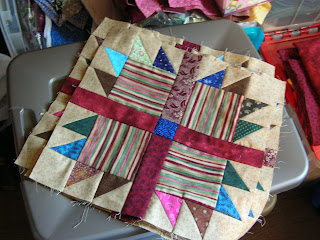 I finished the 12 blocks for Judy L's "Bears in the Farmhouse" Quilt along. Doing the HSTs wasn't bad, deciding where each of the colors should go was, indeed!
I purchased (can't bring myself to say 'buy' these days - especially where stash is concerned) the stripes because I loved the subtle colors. I think I should have gone with the snappier pink, yellow, and white stripes that I'd originally picked from the stash. They made the ecru/brown even darker, though. I think I've gotten this quilt awfully dark, and I'm not sure how to fix it. There was so little yellow in Ye Olde Stashe, that I'd have had to get more to finish, so I did an array of reds instead.
I was thinking I'd switch back to yellows where JL has reds in her design; this quilt is beyond subtle to really somber. Even though there are no yellows in the scrappy HSTs, do you think the yellow border(s) would "punch it up" or make it even muddier and more confusing?
Posted by Librarynan at 3:54 PM 3 comments: 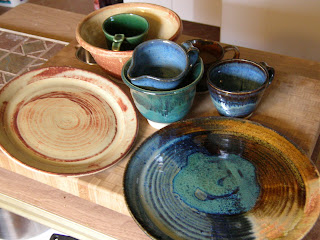 Em asked what I was loading in the kiln... I belong to a group of potters in Roseburg (about 40 miles South of here) and it was my turn to load the glaze kiln. Gabriella and I unloaded yesterday afternoon, and here are some of my pieces that came out of this kiln. More "pot stuff" is on my Wanderer blog.
Posted by Librarynan at 8:47 AM 2 comments: 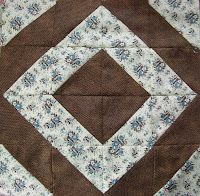 Fancy Stripes it wasn't, and Donna had a much better idea... use a square for the center and strips for the stripes... finishing with triangles in the corners. I really like that idea, it would be a real quick one for a Valley Girls' Quilt to have Kerstin take home with her! I really do like the white background with the blue and brown on it... note to self - don't buy fat quarters, they are just toooo small. Well, actually, don't buy anything - this is the year of "Make it do", isn't it? 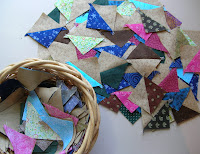 The HSTs in the next photo are for Judy's "Bears in the Farmhouse Quilt Along", but I have to go load a kiln right now, so I didn't get them all ironed - hence the basket of triangles. They are all sewn, but I'll have to press them when I get back tonight. OOoops! The HSTs will be pressed before midnight, but wanted to be sure I could put this on Mr. Linky and be included in step #3.
How do I get a double space between paragraphs? I don't seem to ba able to figure that one out.
Posted by Librarynan at 12:21 PM 3 comments: