Starting with the very first of the FBP blocks (wk#1) as my first make up... I didn't join the group until the fifth or sixth week, I think. This one is Broken Dishes Variation, and the tomato red Batik reminds me of Catsup. I was putting more fabric into tubs so I could locate it easier, and came across a whole stash of Batik I didn't know I had! How cool is that! I got a bunch more fabric and didn't have to spend a dime... no complaints here.

Back to the "Block Party"

I have been a BBAAADDD player in QuiltPixie's Friday Block Party! I got Side Tracked and Off Track and now I'm having to Back Track! I know I don't have to backtrack, but I think I need to - for me. My skills and ability to focus would be greatly enhanced by doing the rest of the missing blocks. My goal is to finish all the "missing blocks" for FBP, but not to stress too much about when they get finished, short of sometime this year. I'm going to attempt completing one make-up block a week. I know I don't work anyhere near as fast as Julie or Roz, so I won't be doing eight in a week! Tee hee! Sometimes I may get two, and the regular block, but I'm not out to set any speed records! The premise of the Party was/is to have fun... and that's what I'm going to do. 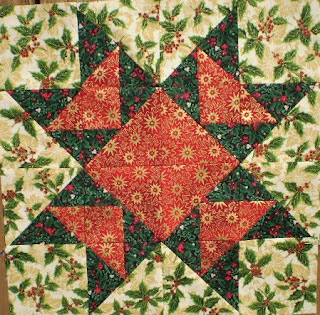 This first block, week 33, was actually posted Thursday at FBP... before the Friday deadline, but I didn't get it posted here. I did it in Christmas fabrics, because I didn't like one of the blocks from the NorCal BOM... my colorway will make it a Christmas Quilt using those blocks. This elegant block is called "Northumberland Star". I followed the directions exactly (yeah, unusual for me...) and found I really didn't like the inherent "Wobbly-ness" of the bias edges. I do like the overall look of the block, but I don't think I'll be making a whole quilt of them. 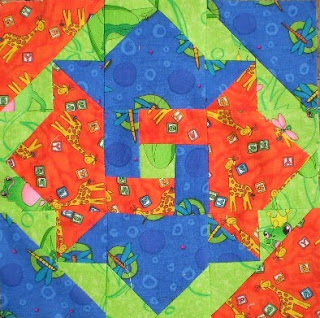 This next entry, week 34, is a small one (9" finished) called "Rally 'Round". Since I made two other 9" blocks in very bright juvenile fabrics (mostly froggie prints), I stayed with the theme - maybe I'll have enough small blocks for a Valley of the Moon Quilt, eh? I really liked the finished block, but I was so un-focused that I spent a LOT of quality time with my seam ripper!
Posted by Librarynan at 1:47 PM 1 comment: 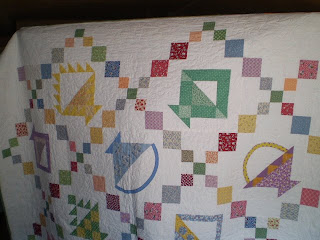 Eric and Eizabeth got married on July 3rd. I knew they were getting married sometime this summer, but I didn't know exactly when and that made it really hard to make a present for them. I wanted to do a quilt, but didn't know what sort they'd like. Then I remembered that I had a very appropriate 30's Sampler Basket UFO; it only needed a few things to make it a finished quilt and give it a great "forever home". Is that silly, to think of my quilts like they are dogs in need of homes where somebody will love them? Anyway, today I sent "Something Old, Something New" off to Eric and Elizabeth in Minnesota. I only got this partial picture because the room where I took it is really tiny, and I wanted the picture "right now"! The basket blocks alternate with the bordered nine-patches so they seem to be set on point, but they are not - I alternated the orientation of the baskets as well to make it even more informal. There are half blocks on the outside edges to make the chains more prominent. I really like the way this quilt turned out and hope they like it too... they don't know it is coming to them!
Posted by Librarynan at 9:26 PM 2 comments: 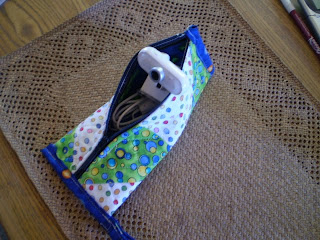 When Erin goes to Kuwait we'll be able to "talk" on the computer! She got a little camera for her computer, but it didn't have any protection in the big computer bag... so I made her a little "Humbug Bag" for it! I did some straight-line quilting to make it more protective, and added a carrying handle out of the binding.


Her camera is so cute! John Lassiter (of Pixar) and company are Mac folks, and I just realized why Erin's camera looks so famliar! That is "Wall-e" poking his head out of the bag!


Since I finished Marjory's quilt (binding is all finished, too), I guess this IS what is on my design wall for Monday... or would be if I had a design wall. I'm starting a UFO tomorrow; an almost-finished table runner. I'm going to start learning machine quilting on it.
Posted by Librarynan at 9:05 PM No comments: 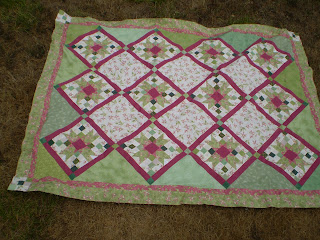 Here is what I've been working on for the last couple of months. Marjory is a friend who lives in Edinburgh, Scotland.... she just redecorated/renovated her bedroom and I had planned to make her a quilt as a birthday and thank-you-for-keeping-me gift.

In Edinburgh, a "Listed" dwelling requires a good deal of red tape if you want to do anything at all to it... you have to go to the Heritage Commission (or somebody important) if you want to make any changes at all. That said, Marjory is re-doing the interior and changing out some of the colors inside the flat. I finally decided on the design for her quilt: feminine and semi-Georgian, in the greens and pinky-red florals she has chosen.

There are a lot of pieces in "Blackford's Beauty" block (the name of the pattern I did the variation upon) and making this quilt took me quite a long time. I changed the center square after I had made the 12 blocks because the blue/lavender print I had chosen, even though it is one of Marjory's favorite colors, didn't have enough snap. I'm happy with the quilt now, though... tomorow the quilt is off to the longarm quilter's - then back to me for the binding, and finally on to Marjory in Scotland! I do hope she will be pleased.
Posted by Librarynan at 3:02 PM 1 comment: