I'm back from California... and ready to GET QUILTING! No sewing machine at my Dad's house, so I did a lot of knitting (and a LOT of ripping out... I've knitted enough to have finished the blue cable pullover, but I'm not quite finished with the back... does that make sense? I think I ripped 6" at least four times - but I like what I've got now, and it actually follows the pattern!)

While I was away, Nova finally got her Swap package, so I can show you the "Funky Chicken" potholders I made for Leah and Nova in the Kitchen Swap. 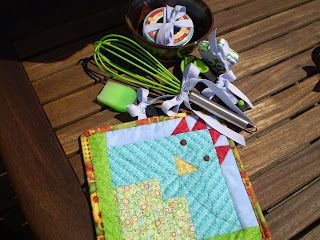 This one is Nova's ... She wanted some bright colors... so the lime green was my color choice for her! You can't see the "Useful Bowl" very well - it is dark brown - at the top center of the picture, but I sent her one of my handmade pots, too. I just love the chicken pattern that I got from Kerstin! 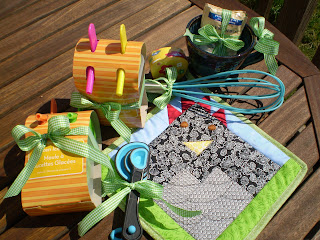 And this one is Leah's. Her kitchen is black and white and blue. I sent her a sturdy tea mug as well, hoping it would survive family use. We were both surprised that the packet of tea survived Customs. The popsicle molds will probably have to wait to be used until Australia' Summer rolls around in October/November.
Posted by Librarynan at 9:49 AM 1 comment:

I have been working on several projects at once... two of them I can't show yet, as they are for Terri's "Kitchen Swap" and since I just sent the boxes out on Friday (and my Partners live in Australia), I don't want to show you what I made until they get their packages! You'll just have to wait... dum, da, dum-dum; dum da, dum-dum... dup, ta da da, dum, dum, dum! (Yeah, VERY few would recognize that as the "Jepoardy" music... but it was.)


I've also been working on the Friday Block Party pieces, the Norcal BOM, finishing the QA BOM from several years ago,on working on the pillows for the kids... and on Marjory's Quilt. Marjory lives in Scotla 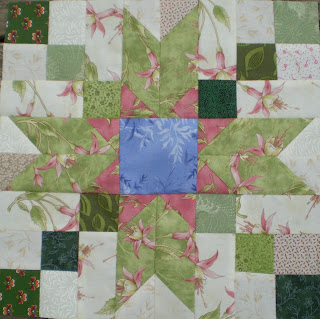 nd, and I'm making her a quilt to go in her "new" bedroom. She lives in a wonderful flat quite near Arthur's Seat in Edinburg. I can show you a picture of the block that makes up the quilt. There are 12 blocks in the quilt and the soft pink is repeated in the sashing between the blocks. I'm thinking of green cornerstones for the sashing... making it a bit like a "journey" quilt as well. I really like the pale greens in this quilt and I think the lavender center block really ties it all together.

The block is called "Bradford's Beauty", it is a straightforward, traditional block, and I used Bonnie Hunter's excellent scrappy tutorial to help with the construction. Bonnie gave her quilt three borders with 4Patch cornerstones, and I think I'll do the same. Of course, I'll send Bonnie a picture of my variation when I'm finished.

I really like the Fuschia patterned fabric that Sheila picked out. I added the lavender print to the centers beacuse that is Marjory's favorite color. I was actually a bit surprised that Marjory had chosen a dark pinky-red and pale green for her window seats instead of her favorite blues and purples, but it made it easy for me to find lots of good greens from my stash to use in her quilt! I'll show more pictures later... I have to go mow some more of my yard! Spring really does make the grass grow, doesn't it?
Posted by Librarynan at 2:45 PM No comments: