Last of the pillow blocks for now... maybe.

This block is called Morning Star 2, from Quilter's Cache... it w 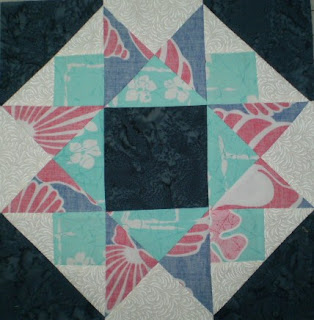 as way back at week #8 in the FBP blocks, and I don't know if I had even started by then! Probably had, but I didn't do this one. I made it out of some of the Kahala Shirt Fabrics for the kids' pillows. Hoped to hae them all finished and given as "Birthday Presents" yesterday - that didn't happen... I still need to practice more on my quilting. I'm getting better, though. I'm still reluctant to put the quilting on these, as I know they'll be around for a long time - and while I don't need perfect, good is really necessary. 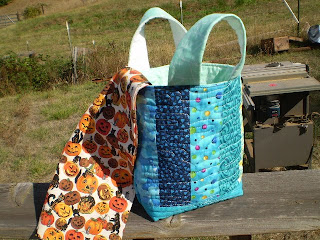 I made a little bag to send off to a quilter in Florida as part of a swap. The bag was fun and I got some quilting practice in on it, too! My "water" pattern is getting better. I loved the Halloween fat-quarter and just had to put it in! It was the ONLY thing I bought (Oh, no... I got a book, too... forgot) at the Pacific Northwest Quilting Expo last week. I was pretty proud of myself for not spending a fortune! I did colect a bunch of cards and wrote on the back what I wanted from each of the vendors, so I can do all that shopping later, tee hee.

Posted by Librarynan at 3:13 PM No comments: 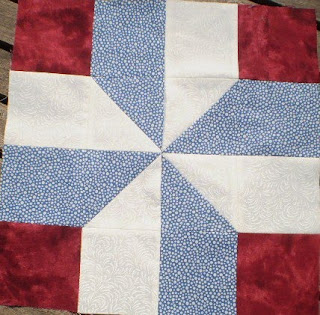 I made three FBP blocks ... well actually two new ones and ripped/fixed one ... today.

This first one is actually the current block, so it isn't a catch-up at all.

Titled "Nelson's Victory", I used bubbles, white tone-on-tone ocean waves and blood red. Problem here - there wasn't enough of the perfect blood red! I had another red, but it was too dark; didn't look quite bloody enough. So, Scot that I am... I sewed some tiny red strips together to get my last 3 1/2 inch square. Yay me! The windy morning made for an oddly-shaped block.


This next one is a catch-up block from the week 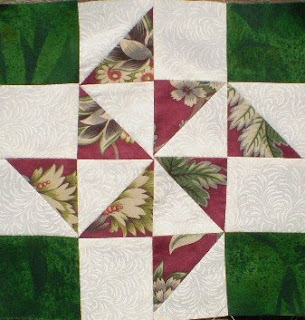 I was in Palm Desert with my Dad. It is called "Double Quartet" and is really tiny - well, for me it is tiny (8") because I don't usually do small blocks ... I tend to re-size them to 12" when I can do the math.

What did I learn from this block? Never sew when you are mad at somebody. You'll just have to take a do-over ! The Do-Over did come out a bit better; I really like the reddish flowered Chinz pattern, and the middle green is my "most favorite" color ever (no fair telling the 'teacher police' about my grevious grammar errors, you guys!)... Anyway, I wasn't about to let this block go and waste fabric just because I had a burr under my saddle. I suppose the solitude did me good, as I'm not as PO-ed as I was. The block is still wonky, but it will do. 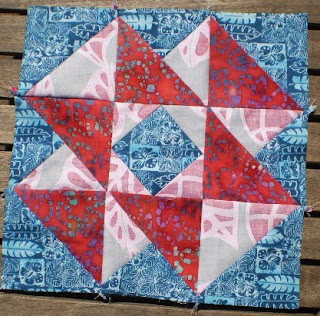 This last block is the "Castles in the Air" for FBP that I posted a while back. "Jack" (yeah, the Ripper- thanks, J!) and I spent some quality time and I got the blue blocks where they belong. One more of the Hawaiian Shirt Fabric blocks, and I'll be good to go for the 27th! Just puttin' the pillows together! Cathy and Duck will get theirs later, but they are OK with that.
Posted by Librarynan at 2:31 PM 1 comment:

Castles in the ... OOOoops! 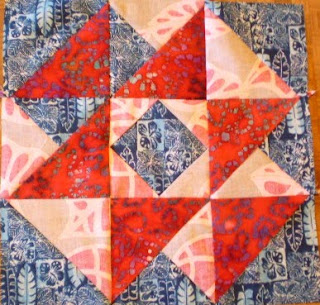 I was pleased with this block, week 35 for Friday BlockParty, that I made using some of the grey Kahala Hawaiian fabric from one of Spud's shirts. I am making the kids each a pillow using the fabric, and thought I'd use some of the FBP block patterns since I don't have projects in mind for them.
After I took the photo, I noticed that there was a problem with the block. I've reversed the top center and left middle blocks. The blue fabric should be on the outside. Oh, well. More quality time with the seam ripper.
Posted by Librarynan at 8:24 PM 1 comment: