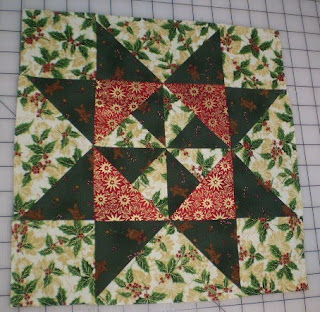 This is the block that Tamara chose for the November block for our NorCal BOM... my blocks are going to become a Christmas Quilt. With that in mind, I've taken the liberty of swapping out a few of the "less Christmas-y" block choices, and replacing them with ones I liked better.

I liked this block going in, though. My background is pretty busy and it takes a strong block to stand up to that holly print! This block is called "Solomon's Star". Thanks, Tamara, I like this one a lot.
Posted by Librarynan at 6:51 PM 1 comment: 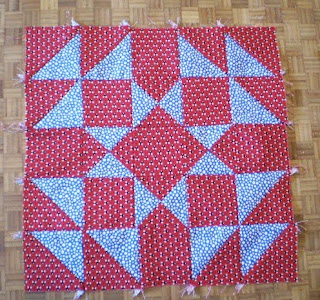 
Not that I have to, I just feel badly that I made a commitment and then flaked on it. How hard is it to make a block a week and post it to a blog that I don't even host? Donna has been really sweet to pull a number of a block for us all to do each week, and there isn't any pressure from anybody to do each and every one. I just think it would be really neat to have 52 blocks in a box at the end of the year! Some of the people who are doing the FBP blocks have different colors or specifc prints they use for the different sized blocks... so they can actually make reasonable looking quilts with the blocks they've made and some of us never even thought of anything that organized! The blocks are all free from Marcia Holm's Quilter's Cache. Some of the blocks really neat, some are not the most interestingto make, and some have wildly complicated directions - the "This isn't as hard as I'm making it look" variety - but making a block a week really does improve our piecing skills, especially those of us who are beginners! I know my points have gotten much more accurate and I'm not intimidated by HSTs or small blocks with lots of pieces. 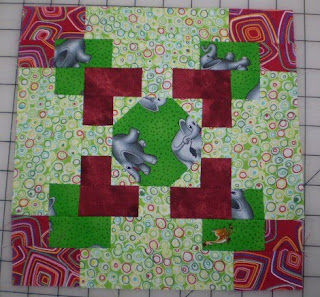 Color choice is another matter - sometimes it is on, and other times not so much. I have a lot of scraps (Kerstin will vouch that I simply cannot throw anything out) and fabric that is pretty dated... but making "scrappy" quilts this year and teh weekly FBP blocks is using up a good deal of that stash. I'm not officially keeping track of yards in/yards used, but the last fabric I purchased was the back for Marjory's quilt (which I had sent directly to Kerstin and didn't even see until it was quilted onto the top!) and the fat quarters I bought at Sisters in July. Oh, no... I forgot...there was the FQ I bought at the Pacific NW Quilt Expo, but I sent that directly to my Friendship Bag Swap partner... so I'm not sure that counts either.) 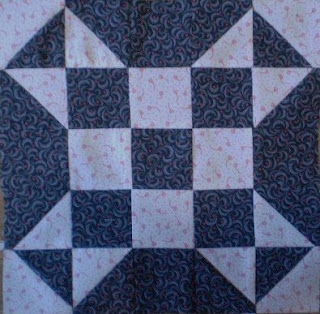 Let's see, what blocks do we have in this post? "Footstool" is the first - not sure why it is called that... I'm not seeing it in the block, but whatever. I changed the direction of the hourglass blocks, so I may have inadvertently made another block entirely!
Next is "Rotunda", though my bright color choices and the elephant print make it a bit hard to seee the tradional block pattern.
The one that looks blue is actually black-and-white print, and red-and-white print ... appropriate for "Dewey Dream" (yeah, 'Black and white and red all over' - sorry, couldn't help myself!) 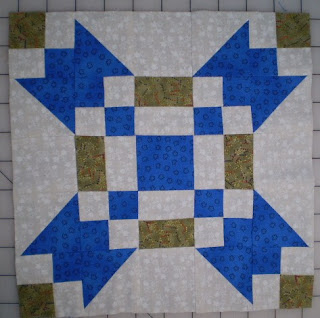 This very last block is not a catch up, it is the current FBP block for week 44 - can you believe it!?? the year is almost over - called "Gamecock". I can't leave well enough alone, though, so I did what my friend Hetty suggested, and swapped out the center square. It was supposed to be the BG color, but I used a blue one. It does make the birds' heads a little harder to see, but the block was way too white the way it was designed! 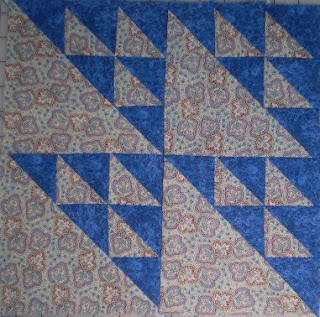 I do love the rain... it makes the trees so happy! Everything is cool and private because people stay inside their nice warm, dry houses... and I get a chance to stay in and quilt, or knit, or cook, or paint! And when I go outside for a walk, everything smells so fresh and good!
I've been catching up on projects for a while... I finished Marjory's quilt, made a pincushion for Sheila, pieced all the Hawaiian Shirt pillows (now I still have to actually quilt them - that is a bit intimidating, still) and I'm catching up on the NorCal (Christmas Quilt) BOM and the Friday Block Party missing pieces. I had a lot of trouble posting these four photos to the FBP website with comments next to the blocks. The formatting got all wonky, and I had to re-do the post five times to get it right...so I'm just going to post these, and not actually comment on them next to each one. 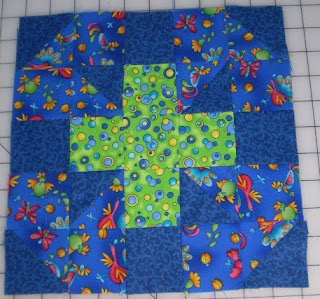 The first one is Something-or-other-swallows (the pattern I used for Leena's quilt last year), the second is Fool's Puzzle, the third is Blind Man's Fancy, and the last one is Album Star. Maybe the order they'll come out - I don't know! 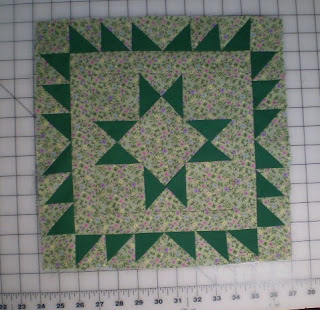 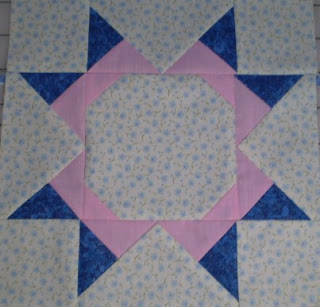 Posted by Librarynan at 11:56 AM No comments: