Two Down, a Gazillion to Go ! 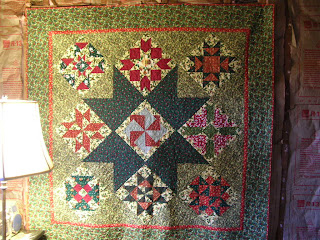 This is the Christmas Quilt, made from "Friday Block Party" 12 inch-ers ... I decided that I had done enough blocks in that colorway to make a throw that would see use one month out of the year. At least that is the plan when we have the insulation and the nice new window in. Right now my Christmas quilt is covering the open space where the window goes in the East wall of the living room. Our lovely pink insulation and the bare studs can be seen in the photo as well - but HAVING insulation is nice and cozy! No wonder it was so hard to keep our house warm last winter, there was NO insulation in the walls at all. 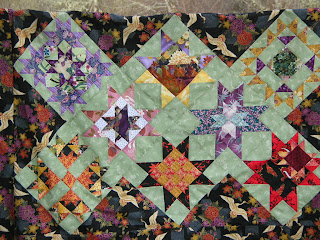 Next comes the January UFO, #6 on my list from the last post - for Judy L's "UFO CHALLENGE". I started this one as a BOM in about 2006 (?? is that right, Kerstin??) in two different color ways. I really like the Asian fabrics, but some of the blocks aren't my very favorites. Makes a nice throw, though. Since I had to put away all my Christmas stuff, I need a throw for my couch. This little throw is small enough that I may decide to try topstitching it on my machine, but right now it is in a bag with it's binding and backing... ready to go down to Kerstin in California. ALL DONE!
I'm still working on Kaylin's Grad quilt, but I've moved the deadline to Valentine's day... I think that is possible. I chose a block for her quilt that I used to complete this one, since I had only seven - and one didn't really match the rest. Kaylin's blck is the one in the upper right of the photo. I'm getting pretty good at HSTs; there are 200 of them in her quilt!
Posted by Librarynan at 6:00 PM 1 comment: